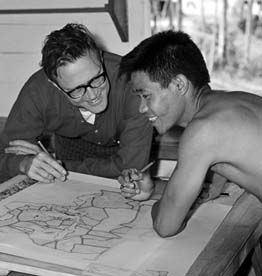 April 27, 1926 - February 18, 2016
Harold C. Conklin, the Franklin Muzzy Crosby Professor Emeritus of the Human Environment and Professor Emeritus of Anthropology, was considered one of the world’s leading authorities on ethnoscience, the manner in which inhabitants of a particular area perceive and treat their surroundings. Following World War II, Conklin concentrated his research in insular Southeast Asia; his principal field sites were on Mindoro (the Hanunóo) and Luzon (the Ifugao) in the Philippines. He was noted for his pioneering work on indigenous systems of tropical forest and terraced agriculture.

First educated in public schools on eastern Long Island, Hal Conklin did his undergraduate and graduate work at the University of California, Berkeley, and Yale University, respectively. Professor Conklin received his Ph.D. from Yale in 1955 and joined the faculty in 1962. He served as chair of the Department of Anthropology, chair of the Council on Southeast Asia Studies, and director of the Division of Anthropology at the Peabody Museum of Natural History, where, after his retirement in 1996, he continued as Curator Emeritus.

A member of the National Academy of Sciences, Professor Conklin  authored scores of articles, monographs and books, including the acclaimed Hanunóo Agriculture and Ethnographic Atlas of Ifugao.
“…..Driven by a desire to record, represent, and preserve how the Hanunóo and Ifugao worked, talked, thought, and played, Conklin presents the details of agricultural and botanical knowledge, spatial orientation, kinship, verbal play, poetry, and music. His findings subtly address contemporary debates and brilliantly display the respect, rigor, and responsibility with which ethnographers should study cultural phenomena.”
-From Fine Description: Ethnographic and Linguistic Essays by Hal Conklin, Edited by Joel Kuipers and Ray McDermott, published in 2007 by the Yale Southeast Asia Studies Monograph Series.
See also: Michael R. Dove, “Harold C. Conklin (1026-2016),”  AAA Journal 2016
And: Roy Ellen, “Harold Colyer Conklin, 1926-2016: An Appreciation,” Society of Ethnobiology, 2016

Manuscripts and Archives
Sterling Memorial Library
The papers comprise personal and professional correspondence, maps, and topical files, documenting the research of Conklin and others, particularly in the area of language in the Philippines. Maps were created in part by the American Geographical Society and the Army Map Service. The Topical Files include professional events and organizations in which Conklin participated; research materials of colleagues Leonard Bloomfield, Frederick Russell Eggan, and Robert B. Fox; and materials relating to the Tasaday Controversy. (The Tasaday, an indigenous people of Mindanao, a Philippine island, were considered in the 1970s-1980s to be the last vestiges of a stone age culture. The validity of this claim was questioned by anthropologists and journalists.) The collection is arranged in three series: I. Correspondence, 1944-2005. II. Maps, 1908-1977. III. Topical Files, 1897-1998.
http://hdl.handle.net/10079/fa/mssa.ms.1956

HISTORY OF CSEAS AT YALE