Human Rights Fact Production: What Is at Stake in Myanmar?

Human Rights Fact Production: What Is at Stake in Myanmar? 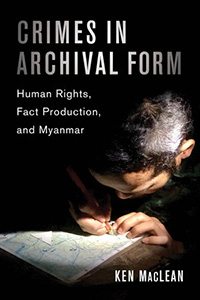 MacLean, in his new book, Crimes in Archival Form: Human Rights, Fact Production, and Myanmar (University of California Press), explores the many ways in which human rights “facts” are produced rather than found in the context of Myanmar. Foregrounding fact-finding, in critical yet constructive ways, prompts long overdue conversations about the possibilities and limits of human rights documentation as a mode of truth-seeking. Such conversations are particularly urgent in an era when the perpetrators of large-scale human rights violations exploit misinformation, weaponize disinformation, and employ outright falsehoods to undermine the credibility of those who document abuses and demand that they be held accountable for them in the court of public opinion as well as courts of law. The talk will elaborate on how human rights “fact” production works, why it is important, and when its use should prompt concern.

Professor Ken MacLean holds a joint appointment with IDCE and the Strassler for Holocaust and Genocide Studies. He received a Ph.D. in Anthropology (University of Michigan 2005), a M.S. in Environment Justice (School of Natural Resources and the Environment, University of Michigan 2004), and a B.A. in Anthropology (Princeton University, 1990). Before coming to Clark University, he was a Post-Doctoral Fellow at the Institute for Comparative and International Studies (Emory University, 2005-2007). Funding for his research has come from the Fulbright-Hays Program, The Wenner-Gren Foundation, and The Mellon Foundation, among other sources.