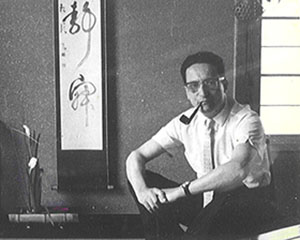 Born Heinz (Jindrich) Benda in 1919, Harry J. Benda was editor of Yale’s Southeast Asia Monograph series from 1960 through the turbulent years of the Vietnam War, until his untimely death on October 26, 1971. Benda received his PhD from Cornell University. Appointed to Yale University in 1959, he achieved the rank of full professor in 1966.

“…Harry Benda’s association with Asian studies stemmed from bitter accident, for he had been of a Prague Jewish family; when Hitler took over Czechoslovakia, his father arranged for Harry’s exodus by getting him a job in a Dutch trading firm in the East Indies. A brother was the only other member of the family to escape death under Nazi rule. In Java, Benda settled down to learn the life of a European merchant, but he had too lively a mind to be content with latter-day colonial society. He saw the remnants of a great indigenous tradition around him, and the stirrings of a new life; he began to meet scholars who were interested in Indonesian culture and from them developed a broad intellectual interest in the people of Java. Many of these intellectuals vanished into concentration camps with the coming of the Japanese; and in 1943 Benda joined them. For many of those intellectuals who survived the camps, the experience was a time of learning and reorientation; so also for Benda, whose interest in Indonesian society deepened into the determination to pursue its study as a career.”

“…In editing Yale’s Southeast Asia Studies Monograph series, (Benda) broadened considerably the possiblility for other, particularly young, specialists on the area to publish significant research, and thereby made available a larger body of materials useful in teaching.

“…..He also played an important role in stimulating research among scholars from the countries of Southeast Asia, helping several of
them to pursue their studies and research at Yale, and also enlarging the opportunities for others to carry out research in Southeast Asia itself. The outstanding example of this effort was in Singapore, where the successful launching of its Institute of Southeast Asian
Studies (ISEAS) owed much to Harry Benda’s efforts. He devoted enormous energy, time, and resourcefulness to helping get the Institute firmly established and then served for fifteen months as its first director. Moreover, along with his two successors, he did much to ensure that, once established, the Institute’s research would be marked by breadth and objectivity.

“….Harry Benda’s contribution to developing Southeast Asian studies was evidenced especially in the time and energy which he devoted over the course of many years to strengthening this field at Yale, (and) he took justifiable pride in his central role in establishing a strong graduate program there… . Harry Benda has made Yale known throughout the world for the quality of the young scholars whom he trained.”