Duterte’s Phallus: On the Aesthetics of Authoritarian Vulgarity

Duterte’s Phallus: On the Aesthetics of Authoritarian Vulgarity

What are some of the sources of Philippine President Rodrigo Duterte’s symbolic authority? Duterte is widely known for his irreverence and bawdy humor that constitute important elements of his governing style. His stories reveal a reliance on invective and an obsession with obscenity. He also makes frequent references to genitalia–his as well those of his critics to the delight of his listeners. He revels in what Achille Mbembe calls an aesthetic of vulgarity that has the effect of establishing a relationship of “conviviality” between himself and his audience. What results is an “intimate tyranny,” much of it centered on the tales of his phallus as it encounters the world. This talk is an attempt to explicate the terms of this intimate tyranny. By closely reading some of his well-known jokes and stories, we see how his humor works by way of a dialectic of vulnerability and vengeance that shores up his popularity even as it consolidates his authority. 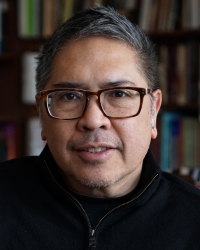 Vicente L. Rafael (Ph.D., Cornell) is the author of several works on the historical and cultural politics of the colonial and post-colonial Philippines, including Contracting Colonialism Translation and Christian Conversion in Tagalog Society Under Early Spanish Rule(1992), Motherless Tongues: The Insurgency of Language Amid Wars of Translation(2016), The Promise of the Foreign: Nationalism and the Technics of Translation in the Spanish Philippines (2005), and White Love and Other Events in Filipino History (2000). He is the editor of Discrepant Histories: Translocal Essays in Filipino Cultures (1995), Figures of Criminality in Indonesia, the Philippines and Colonial Vietnam (1999), and Nick Joaquin’s collection of short stories, The Woman Who Had Two Navels and Tales of the Tropical Gothic (2017). Currently, he is finishing a manuscript on politics and aesthetics of the Duterte regime, “The Sovereign Trickster: Death and Laughter in the Age of Duterte” to be published by Duke University Press.