Collapse of Tatmadaw and the end of Burmanization in Myanmar: Understanding the contentious relationship between democracy and state sovereignty

Collapse of Tatmadaw and the end of Burmanization in Myanmar: Understanding the contentious relationship between democracy and state sovereignty

What lessons can we learn from the histories of Burmanization and state-building projects led by historic kings and Tatmadaw, as we seek to understand the 2021 military coup and subsequent revolutionary wars in Burma/Myanmar?  To explore this question, it is important to deconstruct Myanmar’s decentralized revolutions against Tatmadaw after 1988 and 2021.  Myanmar’s dynamic revolution is being led by ethnic revolutionary organizations (EROs), civilian protests, Civil Disobedience Movement, People’s Defense Forces, Committee Representing Pyidaungsu Hluttaw, National Unity Consultative Council, National Unity Government, and communities of Burmese diaspora around the world. The revolution is defending democracy and fighting for inclusion and equality among ethnic groups and individuals. No era in Burmese revolutionary history presents a unified message and steadfast determination of the public to end the common enemy known as boneyanthu, the military dictatorship.  This multifaceted revolution in Myanmar is unprecedented in histories of revolutions in the world for two major reasons. The first is that this revolution challenges both the fallacy and perceived legitimacy of the Westphalian order of states and questions the notion that a legitimate monopoly of violence can be guaranteed to state within domestic political contexts.  The second reason is that this revolution pointedly defends democracy as we have never seen it in the history of democratic revolutions in the world. In this sense, Myanmar’s dynamic and multifaceted revolution questions whether democracy or sovereignty of state will actually be protected in the international political order during the post-globalization era. It also asks what the relationship between state sovereignty and democracy is going to be like in the future. Domestically, the revolution asks whether the coming collapse of Tatamadaw represents the end of Burmanization and Bama-state building projects, which have been attempted by past kings and post-independent state-builders in Myanmar for nearly two millennia. To dissect these trajectories, I will focus on the meaning of post-2021 coup political development by deconstructing the ongoing people’s defensive war and Spring Revolution in Myanmar. 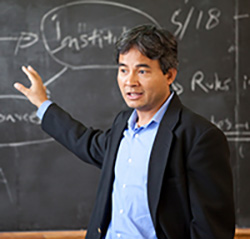 Tun Myint is professor and Chair of the Department of Political Science and International Relations at Carleton College.  He earned his PhD in 2005 from the joint program of the School of Public and Environmental Affairs and the School of Law at Indiana University, Bloomington. He was a postdoctoral research fellow at The Vincent and Elinor Ostrom Workshop in Political Theory and Policy Analysis at IU, teaching and engaging in research on democracy and environmental governance with a regional focus on Southeast Asia. His research examines the role of individuals and groups in the dynamic relationship between social changes and global environmental changes with the focus on democracy, development, globalization, and sustainability.  After 2021 military coup, Tun Myint co-founded Mutual Aid Myanmar to support Civil Disobedience Movement in Myanmar.