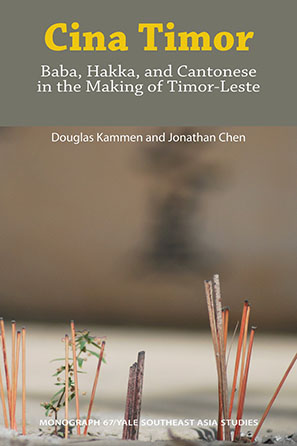 CINA TIMOR: Baba, Hakka, and Cantonese in the Making of Timor-Leste

by Douglas Kammen and Jonathan Chen

Although they were a tiny minority in the most backward of European colonies, the ethnic Chinese played a critical role in the development of Portuguese Timor and the making of modern Timor-Leste. Against their portrayal as either comprador merchants whose sole concern was profit or as hapless victims of tragically recurrent mass violence, this book explores the diverse origins of the ethnic Chinese in Portuguese Timor – early Hokkien-speaking pioneers whose creole offspring engaged in trade both with and against the colonial state, Hakka-speaking agriculturalists from the Pearl River Delta and Meixian regions of Guangdong, Macanese civil servants in the colonial administration, and Cantonese convicts sent to serve out their sentences on Timor’s distant shores. Drawing on Portuguese and Chinese primary sources, the book traces the intersection of colonial state practices, Chinese associational forms, and republican ideals out of which emerged a distinct identity as Cina Timor – Chinese Timorese.

Douglas Kammen is an associate professor in the Department of Southeast Asian Studies at the National University of Singapore. He is the author of Three Centuries of Conflict in East Timor and Independent Timor-Leste: Between Coercion and Consent.

Jonathan Chen earned his MA in the Department of Southeast Asian Studies at the National University of Singapore. He is currently an associate research fellow at the S. Rajaratnam School of International Studies in Nanyang Technological University, where he covers Indonesian politics.