Paper Chains from Fields to Archives: A View of the Information Economy in Eighteenth-Century Colonial Indonesia

Paper Chains from Fields to Archives: A View of the Information Economy in Eighteenth-Century Colonial Indonesia

Throughout the eighteenth century, Dutch East India Company (VOC) administrators dug deep into their own provincial archive in Batavia to unearth bundles of natural-historical papers written almost a century earlier. While natural expeditions were one of the main sources of information gathering in the Dutch East Indies (present-day Indonesia), this presentation highlights the importance of archives, administrative genres, and new systems of information retrieval for understanding how imperial information economies—and by extension, political economies—were sustained over time. I demonstrate how VOC administrators and clerks stationed in Batavia and Ambon were steeped in a scribal culture of their own, one which they had developed into a well-honed system of information collection and retrieval by the eighteenth century. They read various genres of past administrative writing, from letters and reports to select marginalia and Company resolutions, and based on their reading, wrote new reports to resolve their present dilemmas for what they believed would be a better future. Following their paper chains, I trace one particular indigenous figure from the island of Ambon, whose name and exhortations against imperial economic policies would resurface in Company papers long after they were first documented in the seventeenth century. By doing so, I demonstrate the history of the VOC’s own practices of retrieving and recycling natural-historical information while reflecting on the power of provincial archives for historical actors whose own prognostications were based on fragments of mediated information from a different time. 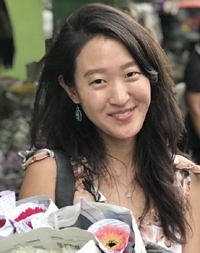 Genie Yoo is a PhD Candidate in History at Princeton University and a Short-Term Fellow at the John Carter Brown Library. She is trained in the early modern and modern history of island Southeast Asia and works at the intersection of history of science, medicine, religious studies, and the history of the book. She is completing her dissertation, “Mediating Islands: Ambon Across the Ages,” under the supervision of Michael Laffan and Keith Wailoo.