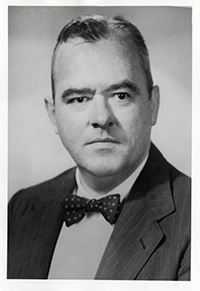 “The first professor specializing in contemporary Southeast Asia at Yale University was Raymond Kennedy, a charismatic, square-jawed man with the short hair and intent eyes of a Marine colonel. Kennedy graduated from Yale College in 1928 and for three years sold American automobiles in what was then the Netherlands East Indies. When the economic depression dried up the market, he came back to Yale for a Ph.D. in sociology and throughout the 1930s as graduate student and junior professor was often in Southeast Asia. During World War II as an intelligence analyst in the OSS (Office of Strategic Services) and the State Department, he was a blunt and prescient critic of the British, French, and Dutch colonial empires.

Kennedy returned to New Haven in 1946 and became one of Yale’s popular, outspoken, iconoclastic* teachers. The central theme of his teaching was that ‘the caste line of oppression and exploitation, whether in America or the colonies, is a race and color line.’

Kennedy was the driving force behind the creation in 1947 of the Council on Southeast Asian Studies, Yale’s first inter-disciplinary area studies program and the prototype for programs which would eventually focus on all regions of the world.

In 1949 Kennedy embarked on a 15-month research trip throughout Southeast Asia to study the interaction of western and local cultures. In April 1950 he was murdered in western Java along with Robert Doyle, a Time-Life reporter, when their jeep was ambushed by an armed band. The killers were never identified. Kennedy would not have reached retirement age until 1976. With his death the United States and Yale lost an informed voice of conscience.”

-From - Gaddis Smith (1999), “Yale and the Vietnam War,” University Seminar on the History of Columbia University,  paper presented October 19, 1999 (quoted with permission of the author) View full draft

“Between 1932 and 1947, Kennedy built up at Yale a one-man center for Southeast Asian Studies. This was begun with work on a collection of books on Indonesia already in Yale Libary. In connection with this documentary aspect of his work, he assisted in assembling data on Southeast Asia for the Yale Cross Cultural Survey; he also compiled an extensive bibliography on the peoples and cultures of Indonesia which was published in 1945. During the same period he wrote books and numerous articles on Indonesia and inaugurated at Yale a graduate seminar in the field. All these efforts bore fruit in 1947 in the creation of a Southeast Asian area and language studies program at Yale, with a five-year Carnegie grant totaling $150,000.

“…….(At Yale) he was not only a pioneer in Southeast Asia studies, but also an able and popular lecturer in undergraduate courses in anthropology and sociology. Because of his vivid descriptions of life in the forests of Malaya, the undergraduates gave him the nickname of ‘Jungle Jim.’

“…….(Kennedy) was a man of deep convictions concerning human welfare and the complex problems of man living at peace with his fellows. In view of his attitude toward social problems and human welfare, it is indeed ironical that he should have met his death by violence in a country for whose independence he had argued so strenuously……Everyone who has worked long with Raymond Kennedy as a student or as colleague has become richer for it; we have all lost a part of ourselves in his death.”

Raymond Kennedy was born on 11 December 1906 in Holyoke, Massachusetts, and died on 27 April 1950 near Tomo, West Java. He was educated at Hartford Public High School, Yale College (1928) and Yale Graduate School. He was an instructor and professor of Sociology at Yale from 1935 through his death. Kennedy and an associate were held up and shot while on a research trip to Java. He is buried in the Christian Cemetery, Bandoeng, Central Java, where a bronze plaque given by members of the Yale faculty was erected.   From - Guide to the Raymond Kennedy Papers, Yale University Library, Manuscripts and Archives.* See Pandu Evereld Cemetery(Photos courtesy of Indriyo Sukmono, 2014)

See also:
“Two Americans Are Found Slain On Jeep Journey in Central Java; One Victim Is R.J. Doyle of Time Magazine The Other Is Believed to Be Professor Raymond Kennedy of Yale” THE NEW YORK TIMES April 29, 1950, Section , Page 3. View Article

Raymond Kennedy papers
Manuscripts and Archives
Sterling Memorial Library
Papers accumulated by Yale Sociology professor Raymond Kennedy and relating to his research in Southeast Asia. Collection primarily comprises writings, maps, photographs, field trip notes, and other research materials documenting Kennedy’s work in Southeast Asia, particularly in Indonesia. Among the writings, some of which are in Dutch and Indonesian, are articles and speeches by Kennedy, memoranda written for the U.S. State Department, and writings by others about Southeast Asia. The collection also includes notes and drafts for Kennedy’s unpublished four-volume work, Peoples and Cultures of Indonesia, and notes, photographs, recordings, and maps from the Indonesian field trip during which he was killed. Finally, teaching materials from Kennedy’s work with the Staff Officers School for Strategic Studies during the Second World War and from other schools are included. The materials are in English, Dutch, and Indonesian
http://hdl.handle.net/10079/fa/mssa.ms.1046