By Ki Suharno Ssn. (dhalong/puppeteer) and gamelan musicians from the royal court of Yogyakarta 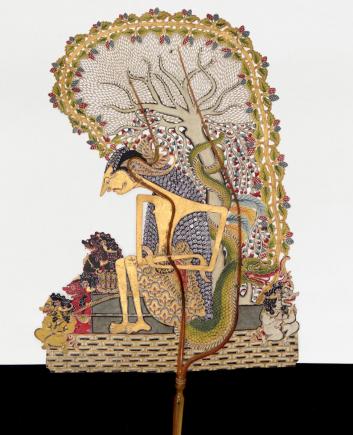 Join shadow puppeteer Ki Suharno Cermo Sugondo and gamelan musicians from the royal court of Yogyakarta (Indonesia) for a special wayang kulit performance of this canonical play drawn from the Javanese version of the Mahabharata and first inscribed in a poetic version titled Arjunawiwāha by the East Javanese court poet Mpu Kanwa around 1030 CE. This performance will feature shadow puppets from the Dr. Walter Angst and Sir Henry Angest Collection of Indonesian Puppets at Yale University Art Gallery, and instruments of the Yale Gamelan.

Synopsis: King Newatakawca, who possesses a boon which makes him impervious to harm, has demanded the beautiful Supraba from the gods. This is something that Lord Guru, the Heavenly Teacher and godhead, cannot allow, for Supraba is a heavenly nymph and Newatakawca a lowly ogre. Realizing that none of the gods under his command possess the means to defeat Newatakawaca, Guru decides to appoint a new Champion of the Gods to defend the heavenly realm from the wrathful Newatakawca—Janaka, the third-born of the Pendhawa brothers, who is meditating atop a mountain and has assumed the name of Begawan Ciptoning. Guru first needs to test Ciptoning’s resolve and strength. Will Ciptoning be up to this test? And how will he defeat a foe stronger than the gods themselves?

Symposium - Yale University
“Islam and the Arts of Java”

Music and Dance of Yogyakarta